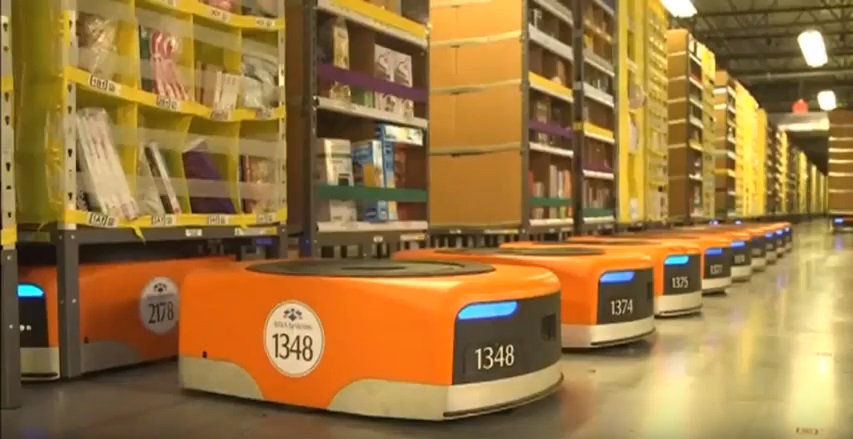 With manufacturing and production rapidly evolving thanks to advanced automation and robotic technology, a similar change is occurring within warehouse logistical operations. At present it is estimated that approximately 80% of warehouses still rely on manual processes. A figure which is set to dramatically rise over the next five to ten years.

A recent report by Research and Markets stated that revenue generated by the current global robotics market lies at $1.9 billion. It is predicted that within the next three to four years this figure will rise to around $22.4 billion. Everyone is aware how Amazon’s Kiva robots have seen them lead the way in this respect, but with the technology becoming more affordable and accessible, many companies are keen to follow suit.

THE CHANGING FACE OF THE MODERN WAREHOUSE

With increased competition online customer demand is now higher than ever, and both manufacturing companies and supply chain sectors need to keep finding new ways to meet this expectation. Robots appear to hold the answer to a number of growing issues faced by a host of companies. Pressure to meet rising pay demands, and a lack of resources to expand the existing workforce has left businesses trying to maintain order fulfilment and in many cases, find a way to achieve an increase in orders.

The current strength of robotic technology lies in its ability to perform repetitive tasks far more efficiently – and in many cases more safely – than humans. Aside from the initial financial outlay, robots also place less strain on company resources. There are no limits on working hours, no holidays, sickness, overtime and many of the benefits afforded to the typical workforce.

WHERE CAN THE TEHCNOLOGY BE USED?

The combined use of 3D laser vision and robotics has allowed warehouse centres to overcome the issue of unloading, storing and loading products that vary in size and weight. 3D laser vison is able to scan the goods as they arrive and leave, analysing the load to decide the most efficient way they should be moved. This is the communicated to the robot which can then provide fast and consistent movement of the packages.

Increasing efficiency within order throughput is an area that every warehouse hopes to achieve by consistently analysing existing systems and processes. Whereas before robots would struggle to differentiate between product types, the technology is now at a point where that is no longer a problem. Not only does the picking process become more efficient but because the selection of goods are more accurate, productivity within the warehouse significantly increases.

For the larger scale orders that combine a multitude of different shaped products, these require individual packaging before delivery to retail outlets. There are a number of different orders rolling through each warehouse throughout the day, both incoming and outgoing, so robots that can work safely alongside humans provide optimal results. As with many other areas in which they are implemented, robots add efficiency and accuracy to the process, allowing more packaging to be completed in a shorter space of time.

The integration of robots into the logistical workplace looks set be a permanent change that will only increase further as the year’s progress. As always, technology will continue to improve and even the most traditional companies will have to find ways to adapt to the new world of supply chain. Where once they were viewed with suspicion and seen as unreliable, robots are now able to achieve better accuracy for a longer period of time, and at a lower cost to the business. The possibilities they now present makes this an exciting time for the logistics industry, and with transportation and delivery due to experience a technological evolution, there will be many more fascinating developments to come over the next decade.